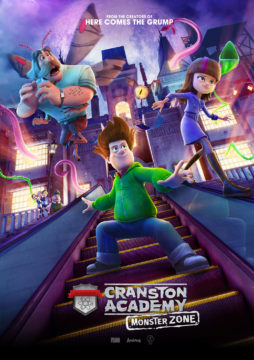 CRANSTON ACADEMY: MONSTER ZONE is the story of Danny, a 15-year-old genius bullied for his intelligence and struggling to fit in at school and Liz, the daughter of a famous scientist whose legacy she strives to overcome and be considered a genius in her own right. When Danny is unexpectedly offered a scholarship to Cranston Academy a secret, prestigious boarding school where Liz is the number one student, a rivalry sparks. In his quest to prove his intelligence, Danny inadvertently opens a portal to another dimension and unleashes a slew of monsters on the school. Liz must put their rivalry aside and help Danny together with a half-moth, half-man professor aptly nicknamed Mothman, to overcome the creatures of the 5th dimension and save the school.