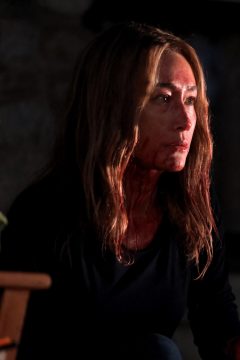 Tess (Maggie Q), may be out of place at her sister’s bachelorette party, being a Special Ops veteran. But she loves her sister so she’ll go along and join her at the family’s country house, a fun venue to get wild and crazy celebrating the upcoming wedding. Strangely, the usual caretakers of the property aren’t there, making Tess suspicious from the onset. A male stripper arrives to provide the evening’s entertainment, just as one of the women is killed when struck by an arrow. A second arrow kills the stripper and the women realize the house is under siege. Tess immediately shifts into strategic battle mode, instructing them to stay calm, block all entries, and scavenge for weapons, while she evaluates the force they’re up against. The attackers outside are after both drugs and money, with no interest in letting any of them out alive. They believed this would be an easy take down, but didn’t account for Tess, her skills, or the determination of the group. Tess will stop at nothing for payback.