Startseite / Filme / I don’t love you yet 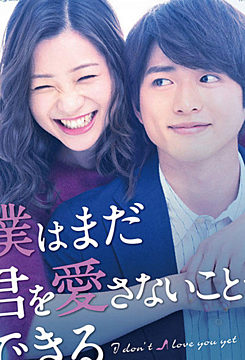 You Mitarai（Rika Adachi）works for a shoe manufacturer. Her career is going well, but not her relationship. Her classmate in senior high
school and college, Ren Ishida (Jin Shirasu) who works as a developer handling projects such as urban renewal of cities, is her best friend
and the only person to whom she could speak out her real thoughts.
On You’s 29th birthday, the two bet that if one of them gets married by the last day of his/her 30th, the other should give him/her a red
envelope with 300,000 Yen. Both of them were sure that it’s impossible for them to fall in love with each other, yet being influenced by that
bet, the relationship between the two starts to change along with the approaches of Ren’s junior, You’s junior and You’s reunion with her exboyfriend……