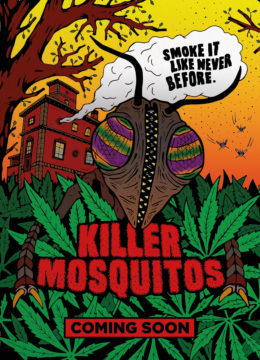 A group of friends decides to spend a weekend in an isolated country house away from stress and cell phones. But when a swarm of killer horseflies comes by, not only their holiday but their lives are put in danger. The only antidote against these killer horseflies is the smell of marijuana and hashish. Therefore, not to be attacked and eaten alive, they have to smoke joints! Pity that the effect lasts only a few minutes, and then they are exposed to danger again.

They will have to do anything they can to save their lives, but they will have to do it being totally stoned! The consequences will be deleterious, surreal and hilarious, as their attempts to run away will often have gory and grotesque outcomes.

Swinging between realism and hallucinations, Tafanos has a high potential for a successful B-movie, inspired by Robert Rodriguez's 'Grind House' style and the Italian horror movies from the 70s.