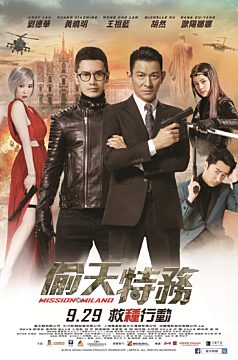 Louis Luo (HUANG Xiaoming) , chairman of a technology group, is a wealthy entrepreneur in town. Yet underneath this camouflage, he is a martial arts master whose ancestors were goodwill thieves who rob from the rich for charitable intentions. He often fights against injustice and collaborates with the police to fight crimes.

A university in Switzerland funded by Louis has successfully invented the “Seed of God”, a remarkable invention that enhances harvest on the most barren lands in just one minute. During a test demonstration, while Louis is amazed at how the “Seed of God” can put an end to famine, he can also foresee how it will drive agricultural societies into bankruptcy. Snow, leader of an international crime conglomerate “Crescent”, raids the scene with her protégé, Phoenix (Michelle HU). They seize the “Seed of God” and abduct its inventor and get into a fierce wit and fist game with “Crescent” and an even more powerful terrorist group “Kmax”.

Interpol sends Sir Sampan Hung (Andy LAU) to work with Louis in a joint effort to retrieve the “Seed of God”, accompanied by Louis’ assistant, Amon (WONG Cho Lam) and his sister, Ka-yan (Nana OU-YANG). They get into a fierce wit and fist game with “Crescent” and “Kmax”. The battle field spans across Macau, Hong Kong and Milan. Louis and his companions travel as far as Kmax terrorists’ base in Eastern Europe. So, what will be the fate of the “Seed of God”?