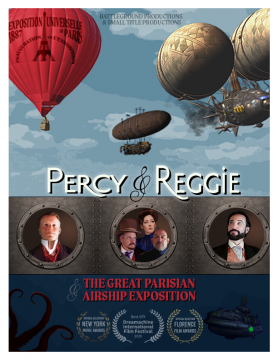 In this comedic flight of fancy, a pair of aristocratic chums make a grand outing to an Exposition--with a detour or two provided by some infamous Jules Verne villains.

Filmed during the pandemic all on greenscreen, P&R is a deliberately low-budget excursion into the world of such classic 50s and 60s fare as "Master of the World" and "Mysterious Island," with a very grateful nod to the cinematic genius of the Czech filmmaker Karel Ziman.

Winner of the 2020 Dreamachine International Film Festival Award for SFX, and an official entrant into both the 2022 New York Movie and Florence Italy Film Festivals,