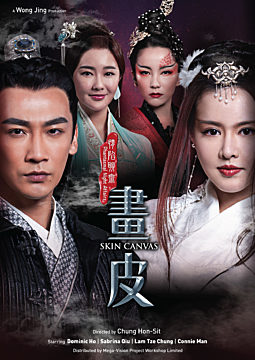 Head of the imperial guards, Wang (Ye Xiangming) and his best friend, Mu (Owen Ng) are the highly regarded subordinates of the senior government official, Jiang. Wang’s wife, Rong (Zhen Qi) is born in a well off family, . which makes Wang and Rong a perfect match and they are regarded as the role model couple of the town.

During the investigation of a series of peculiar murders recently, in which all of the victims are skinned, Wang rescues an injured girl, Ling (Yun Qianqian). Ling’s existence brings about changes to Rong and Wang’s relationship. Beneath it all, Ling is a fox goblin working for Lian (Connie Man), the Queen of Goblins. Lian sends Ling to use her beauty to lure Wang into stealing the Secret Amber from Jiang, with an ultimate aim to take over the mortal world.

Yan (Liu Tengyuan) and his protégé Cheng (Christy Chan) go to Wang's Mansion to capture Ling. Although Ling is a goblin, she does not want to harm the Wang’s family. Without other options, Lian has to snatch the skin of Ling and use it as a disguise. In Ling’s skin, Lian stirs up chaos in the Wang's Mansion and challenges the relationship between Wang and his wife...