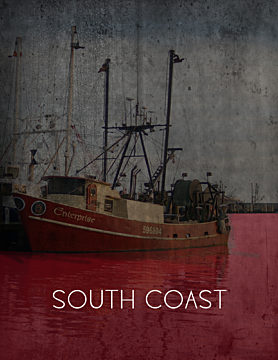 Joe and Tony Barboza are forced into war with the New York Mafia following their parents' execution. The Barboza Brothers conquer the South Coast underworld, one racket at a time.

South Coast is set in the blue-collar Southern New England coastal cities from Rhode Island through Maine. The coastline is speckled with ports and vessels packed with drugs, guns, and cash.

Based on real events - January 20th, 2011, federal authorities arrest 120 of the Patriarca Crime Family's most influential lieutenants across New England. Decades-old influence of the New York Mafia in Boston and Providence was lifted overnight. This lucrative power vacuum was rapidly filled with a colorful cast of local gangsters looking for their mark. In steps, our original characters, Joe & Tony Barboza, brothers forced into a life neither imagined after the execution of their parents.

With the influence of their Uncle Vitro, a fishing boat captain with the salt of the sea running through his veins, and family friend Daniel, the Barboza Brothers loosen the stranglehold of the New York Mafia on the South Coast. Brutally dismantling the Mafia's governance one Racket at a time. Enlisting a diverse crew of local gangsters, with a keep it in the family business plan, the Barboza Brothers take control of the drug, extortion, gambling, smuggling, and money laundering rackets. Keeping profits and power on the South Coast.