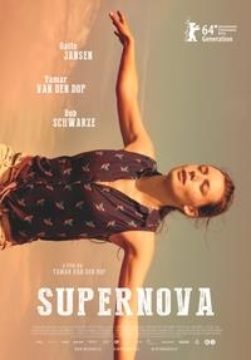 Meis is fifteen, lives in the back of beyond and aspires to a grand and stirring life, but all that happens is the passing of the time, waiting for the next car to run into the front of the house. She dreams of a young car driver called “Brad” whom she would like to take care of and maybe have sex with. Dad is waiting for the next driver to bring some heroism to his life again. Mom is waiting for the same moment, so they can permanently move to the city. Ever since dad was the first person that ran into the house, grandma cannot stop shaking. The shaking seems to worsen lately. Meis hopes this is a sign that something is bound to happen.

The whole family is waiting in the bisected room, of which three meters plus a thirty-centimeter safety margin have been declared unfit for habitation by grandpa after the last collision. Grandpa himself fell from the half-completed bridge years ago and drowned. They all wait for the next driver to crash their house.

During one of Meis’ forbidden, dangerous nocturnal visits to the half bridge, deliverance finally arrives. Part of a trunk sticks out from the cloud of dust blowing from the house front. In the car, the solution incarnate lies, all crumpled up. He is about 19 years old and his name could very well be Brad.