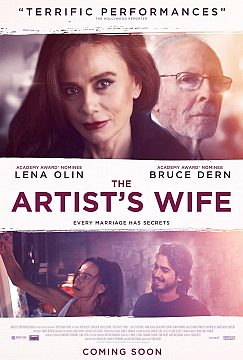 Claire (Lena Olin), the wife of famed artist Richard Smythson (Bruce Dern) and once a promising painter herself, now lives in the shadow of her husband's illustrious career. While preparing work for a new exhibition, Richard is diagnosed with dementia. As Richard's memories and moods become lost and erratic, Claire attempts to shield his illness from the art community while trying to reconnect him with his estranged daughter and grandson. Claire, who has taken up painting once again,must decide whether to stand with her husband in the shadows or step into the spotlight herself. Reminiscent of 45 YEARS and STILL ALICE, THE ARTIST’S WIFE is a thought-provoking, poignant, and humorous drama about the challenges of marriage and partnership, as well as the effects of dementia on a family.