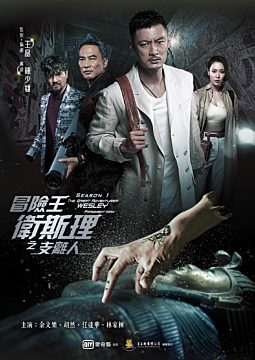 Based on the Chinese adventure-sci-fi classics, The Great Adventurer Wesley series tells the exciting quests of Interpol Special Agent Wesley (Shawn Yue)exploring the unknown and combating mysterious crimes around the globe.

Extraterrestrial civilizations have long been penetrating Earth secretly. One time, a hand that is free to move by itself appears in Interpol senior Chief Bai (Simon Yam)’s home. Chief Bai’ s daughter Sue Bai (Michelle Hu), also an Interpol agent, joined hands with Wesley on the investigation, only to learn that a man, Zac Deng (Gordon Lam) who can disintegrate his body as he wishes exists.

Later, the corpse of a pharaoh who was dismembered and mummified is discovered in Egypt, leading everyone to a mysterious ancient tomb. There lies not only the secret of body disintegration, but also the long-pursued mystic energy. A thrilling rivalry between Wesley and the “Fragment Man”, Zac Deng unfolds in the ancient tomb. As the truth unveils, the mastermind behind all conspiracies show his truth color. A ferocious battle is inevitable and brewing…