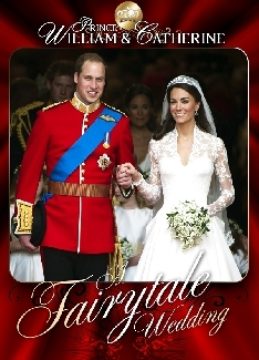 Celebrated by millions across the globe, the Royal Wedding of Prince William and Kate Middleton at Westminster Abbey on April 29, 2011 marked one of the great moments in modern history as overseen by Her Majesty Queen Elizabeth II. A resplendent spectacle of grand pageantry and an exciting talking point among Royalists and romantics alike, the wedding was not only a spectacular celebration of British tradition but a glowing recognition of the loving couple, warmly welcoming Kate into the family and officially introducing them to the world as The Duke and Duchess of Cambridge. Following their fairytale romance in St. Andrews and their long awaited engagement announcement, this lavish presentation also covers all angles of the graceful procession, featuring a fantastic flow of high fashion from Clarence House to Westminster Abbey and the welcome return to Buckingham Palace, highlighting the scope and scale of a ceremony attended by over 1900 wellwishers and dignitaries. Featuring sterling commentaries from Leigh Purves, Emma Crosby and celebrity hairstylist Nicky Clarke, and informative celebrity panelists such as designer Kate Halfpenny, stylist IanB. and fashion expert Maggie Rizer, William And Kate: A Fairytale Wedding documents in glorious detail the regal colour and movement of a most monumental event.