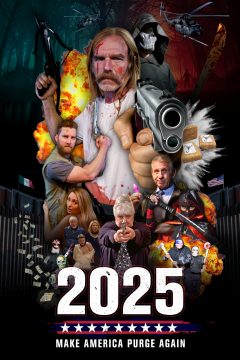 In the year 2025, the 45th President of the United States of America is back for his 2rd term in office and re-implements the Purge. With the 2nd Mexican border wall in the works, Homeland Security is cracking down on criminals to Make America Safe Again. Bill Wilson makes the bust of his career by taking down a member of the Mexican Drug Cartel and makes a small seizure of narcotics and cash that draw interest from a group of dirty agents. The following night, the night of the annual purge, Bill receives some unexpected visitors that pay him and his family a visit as they attempt to survive the next 12 hours by safety in numbers.