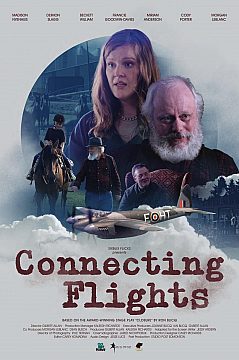 This film starts in 2008 with the story of Donald Barlow, who lives in Nottingham, England. He decides to search for his father who, he has discovered, was a visiting Canadian serviceman during World War 2. Following his mother's death, Donald engages a search agency to find his father (Gordon Devereaux) and establish contact. But when the agency does find Devereaux, the elderly man vehemently denies his involvement with Donald's mother and categorically refuses to meet the man who claims to be his son. Donald's journalist daughter, Claire, refuses to give up and, using her married name, flies to Canada to meet and interview Devereaux. She takes her nine-year-old son (who is Devereaux's great-grandson) with her, and a unique and unexpected friendship develops between the crusty old man and the boy. Although Claire had not intended to reveal the connection between them, she now privately telephones her father and suggests he fly to Canada. Yet her secret plan is shattered when the boy tells Devereaux things about his family, from which the old man deduces the connection and recognizes he has been duped. This sets in motion a vicious and seemingly irreversible conflict between Claire and Devereaux. Filmed in the spring and summer of 2020, this film is believed to be the first Alberta production completed under just introduced, strict Covid-19 regulations. Filming initially commenced in March 2020 and then was paused as Alberta locked down. Filming recommenced in July 2020, with some roles being recast as some of the original actors from other parts of Canada and from the USA were unable to travel to Alberta during the pandemic. Filming was subsequently completed by an all-Alberta cast and crew in July and August 2020