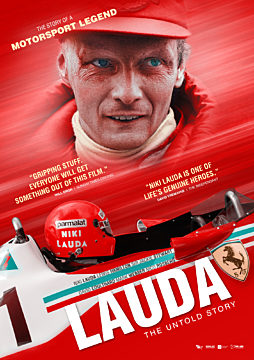 1976
Formula One is in its most glamorous but also most dangerous time. The best drivers of the time, Niki Lauda and James Hunt, personify the high-octane 'life in the fast lane' lifestyle of the era. Since the inception of Formula One in 1950, 25 drivers had lost their lives either in practice or race conditions.
August 1st, 1976, the German Grand Prix marked a real turning point for the sport. Current champion Niki Lauda is snapping at the heels of rival James Hunt, all eyes are on them at the controversial Nürnburgring. Lauda, the track's record holder is also one of its most outspoken critics having voiced his concerns over the track's safety.

The Accident
The race began in the wet. After changing to slick tyres, Lauda falls behind. To get back amongst the leaders he began to drive more aggressively, taking more risks. As he approached the 'Bergwerk' section, Lauda's car suddenly crashes into the rocks, his car becoming engulfed in flames within seconds. After being dramatically pulled to safety, Lauda slips into a coma. In a nearby hospital he is read his last rites.
Amid unimaginable suffering and against all odds, Lauda begins to recover and is taken home to his home near Salzburg. Defying all expectations, Lauda makes his comeback at Monza, 33 days after doctors had given up on him. Ultimately losing the '76 World Championship by a single point, Lauda recovered to retain the title the following year.