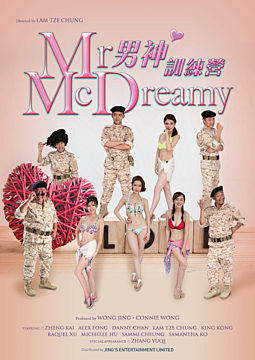 KenKen (Zheng Kai) is a typical affluent second generation who wastes his life away by squandering his money like playing ducks and drakes, and never takes up any proper job. He is so fond of himself that he named himself “Mr. McDreamy”. Knowing his child has been spoiled, KenKen’s father decides to kick KenKen out of the house and stops financing him.

Being abandoned, KenKen decides to set up his own business and establishes “Mr. McDreamy Training Academy”. His die-hard girlfriend, Wanda (Raquel Xu) stays with him to support him by all means. KenKen manages to recruit four protégés: Da Chun (King Kong), Chocolate (Lam Tze Chung), Bully (Danny Chan) and Mimosa (Alex Fong). He uses various unconventional means to transform his four protégés into “Mr. McDreamies”, which unexpectedly turn into numerous hilarious scenes. With much effort, these four “trainees” manage to find their own loved ones.

KenKen meets Angelalady (Tian Leixi) at a banquet and falls for her. Wanda walks in on KenKen and Angelalady at home which makes her heartbroken. Worse still, the newly met lovers even make out in Angelalady’s house, and is caught in the act by her husband. Her furious husband lifts KenKen up and throws him out of the high floor house.

KenKen hangs around on the street penniless. He meets Wanda and his four protégés again. After the break-up, Wanda has started a new life by dressing herself up, and making herself pretty. KenKen’s four protégés have become the real Mr. McDreamies, and maintain very sweet relationships with their girlfriends. Suffering from hunger and cold, KenKen has no choice but to return home. To his surprise, his house is set up as the mourning hall of his parents…