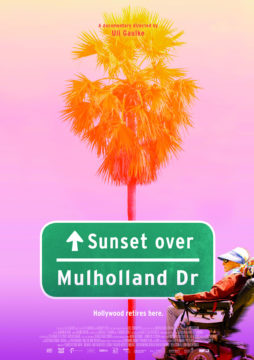 Hollywood: That’s glamour, stars, the silver screen. But not everybody becomes famous or wealthy. Most workers in the film industry — behind and in front of the lens — toil without recognition and riches, and when get older, they often have little means to support themselves. This is where the Motion Picture & Television Fund comes in, a retirement community in Woodland Hills north of Hollywood.

Industry legends such as Steven Spielberg, George Clooney and Jeffrey Katzenberg help support this old folks’ home, where retired film pros — from directors to composers, cameramen or sound engineers — can spend their twilight years safely and in peace. Here they can also continue to pursue their talents and passions, thanks to an in-house TV studio, music rooms, writers groups and their own, state-of-the-art movie theatre.

Some of them produce short films or pursue other projects. “Sunset Over Mulholland Drive” follows one such project and its creators, from the first brainstorming session all the way to the premiere. Throughout, the residents share their very own Hollywood memories, revealing enduring dreams and hopes beyond the limelight — and lessons in life and love.