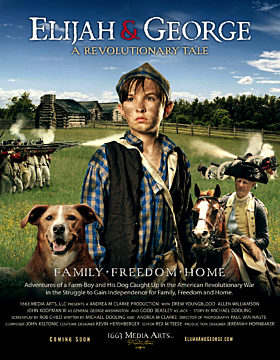 Elijah and George - A Revolutionary Tale

ADVENTURES OF AN 10-YEAR-OLD FARM BOY AND HIS FAITHFUL DOG CAUGHT UP DURING THE AMERICAN REVOLUTIONARY WAR IN THE STRUGGLE TO GAIN INDEPENDENCE FOR FAMILY, FREEDOM AND HOME.

Elijah and George is a Big Picture Film with 120 actors and over 600 special extras, the story has something for everyone! Action, adventure, a love story and a historical battle scene!

In 1778, 10-year-old Elijah and his Ma and Pa live on a farm just outside of Philadelphia.

Pa (Eli) wants no part of the revolution, he just wants to be a farmer. When the British Horse Soldiers ransack his house, his wife Maggie is killed. Eli joins the 6PA Regiment to avenge her death.

With nowhere else to go, Elijah follows him along with 2000 other women, children and men who make up General George Washington's civilian army. Elijah’s only solace—his only piece of home—is playing draughts (checkers) with his Pa at night. It reminds him of home.

When his Pa goes missing at the Battle of Monmouth, Elijah sets out on an impossible adventure to find him. Wearing no shoes, no shirt, his body covered in mud, and a feather stuck behind his ear, Elijah sneaks out of camp, runs into a cow, is chased by a dopey guard, befriends a Oneida Indian Guide, darn near gets shot by Lieutenant Alexander Hamilton, falls eight feet into a creek, reunites with his faithful dog Jack, is captured by British soldiers, and plays draughts with General George Washington.

Will the game of draughts save Elijah's life and get him back home?

A BAPTIST MINISTER OVERCOMES PERSECUTION AND RISKS TREASON TO SECURE RELIGIOUS LIBERTY AND CIVIL FREEDOMS FOR THE COLONY OF RHODE ISLAND.

Stage: Development - Reasonable to be ready to roll camera late 2021.

“A Lively Experiment” is based on the life of Baptist Minister and Physician Dr. John Clarke and his journey to overcome religious persecution, loss of personal freedoms, mounting sacrifices and risk of treason to secure the Rhode Island Royal Charter of 1663 from King Charles II which granted far-reaching Religious Freedom and Civil Liberties to the colony of Rhode Island, thereby changing world history.

“The whole basis of Dr. Clarke’s Charter and land purchases was “equality”! Even more astounding, he achieved through peaceful measures."