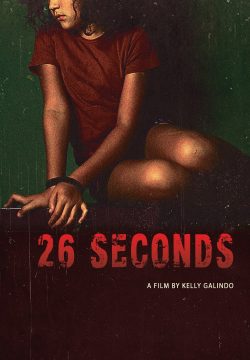 26 Seconds is a poignant and unapologetic documentary on global sex trafficking that will deliver a compelling and emotional journey that strives to raise worldwide awareness. The title stems from a statistic that every 26 Seconds a child is trafficked globally. The documentary highlights the heartbreaking stories of children and women from vastly different cultures experiencing horrifically similar traumas, and attempts to shed lights on the active efforts of survivors, other individuals and non-profit organizations to rescue more victims and raise awareness with the purpose of ultimately destroying this horrific worldwide industry.

26 Seconds portrays the horrors suffered by children and young women from each of the target countries: Thailand, Cambodia, India, Iraq, East Africa, Mexico and in the United States. The story is told through the survivors’ point of view in raw intimate interviews, the audience gets a shocking glimpse into the lives of children and women in various cultures and regions with vivid details of how each victim was captured or lured into the sex trade, the horrors of their captivity, and the commitment of each NGO and individual to get them out at whatever cost. We follow the survivors in their attempts to heal and reintegrate back into normal life with the collaboration of government agencies, local communities, non-profit organizations that are willing to rescue victims and survivors to lead them through the delicate process of restoration and healing.

The cause is real: 1.2 million children are trafficked every year. Victims are coerced, manipulated and/or kidnapped. Others are forced into it by close associates, relatives, friends, boyfriends, pimps, madams, traffickers, and/or tragically sometimes even their own parents. Forced labor is a $150 Billion per year industry, and unlike the drugs or weapons trade, a child or woman can be sold repeatedly, sometimes as often five to ten times per day. This is modern day SLAVERY.

“Film is my commitment to creating work that matters in our world, I wanted to film a documentary on global sex trafficking because it is a fast-growing and horrific industry that tragically affects every child and woman worldwide. We can either do something or nothing. I simply chose to do something with the resources and creative talent I possess and have access to as a professor in film. As a filmmaker, my intention was to tell the story. It was not possible to tell the story of human trafficking unless I visited the countries and met the victims trapped in the sex trade face-to-face – the pimps and madams who sell them, and the johns who buy them – but the true heroes are the nonprofit organizations that rescue, restore, and reintegrate these innocent children. Creating awareness is not enough but rather a call to action is ALL of our responsibility. It will not only take an army of heroes but also a village of ordinary people like you and me.”​​​

The first stage was a documentary short. The second stage is a feature documentary including all nine countries filmed from Asia to Africa, and right here in the USA. The third stage will be a dramatic docuseries of the survivors' stories only. The 26 Seconds team is currently raising funding for post-production to complete the feature documentary. The production will be making a strong push for top-tier film festivals, along with a PR campaign for the Academy Awards. Sid Ganis, the supervising producer for 26 Seconds, was the past president of the Academy of Motion Pictures, Arts, and Sciences; he also served as chairman of the Academy’s International Outreach Committee up to 2017. Prior to this, Ganis has been on the board of directors at Marvel Entertainment until its sale to Disney. His film career in marketing and publicity includes working at 20th Century Fox, Lucasfilm, Columbia Pictures, Warner Brothers, and Paramount Pictures.

For more information, you can visit 26seconddoc.com, YouTube & IMDB.

26 Seconds has been featured in the L.A. Times, Epoch Times, & Newsroom.