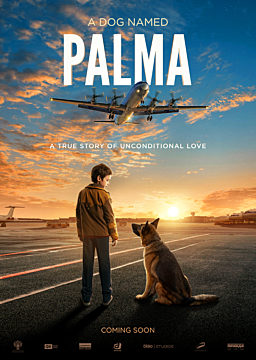 1977. Igor Polskiy is travelling abroad with his dog named Palma, but at the very last moment she is not allowed on a plane due to the lack of medical documents. Polskiy has nothing to do but to leave the dog right at the runway, flying off without her. Palma hides at the airport, running up to every single landing Il-18 plane – the one her master left on – hoping he’ll return one day.
At the same time, a 9-year-old boy Kolya arrives at the airport. His mother died, and now he has to live with his father, a respected pilot Vyacheslav Lazarev, whom he hadn’t ever seen in his life before. Friendship immediately arises between the two lonely souls – Palma and Kolya.