Home / Films / A GLASS OF REVENGE 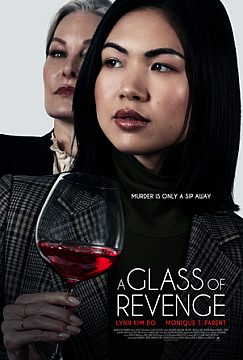 A GLASS OF REVENGE

Eager to become a sommelier, blogger Emily (Lynn Kim Do) applies to join a competitive wine academy, just like her late mother did years ago. Emily is thrilled when she’s accepted into the prestigious program. Knowing her father disapproves of the elitist, cut-throat wine industry, she reminds him that this is their only chance of saving the family restaurant. With her father’s reluctant blessing, Emily heads to Napa Valley to begin the sommelier program orchestrated by owner Victor (Michael Swan) and his vice president Gillian (Monique Parent). Throughout the weeklong competition, Emily is bullied by her competitors and even put in mortal danger. As more people turn up dead, Emily suspects something sinister is going on. When she comes close to learning the truth about the competition and her mother’s death, Gillian frames Emily for the murder of one of her competitors. But Emily refuses to go down for a crime she didn’t commit and fights back to save herself and the future of her family’s restaurant.