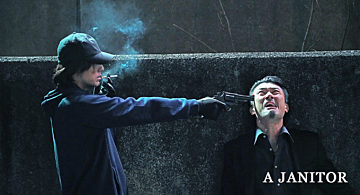 Fukami was raised by Majima, the president of the Majima Group since Fukami’s father Mitsuo was killed by someone in his childhood. Fukami is now working as a janitor at high school as a secret bodyguard for Yui, Majima’s daughter. Fukami also has a secret face as an "assassin" trained by Majima. However, one day, Fukami hears from a gang member who is hostile to Majima that the killing of his real father was done by Majima's plan, then Fukami shoots Majima. When the top of the organization is murdered, Yui's half-brother, Honda, takes action. Honda's purpose is to capture Yui, who holds the key to Majima's property, and to slay her bodyguard, Fukami. To obey Mashima's will, "Protect Yui," Fukami confronts the nine assassins Honda sends to Yui's school.