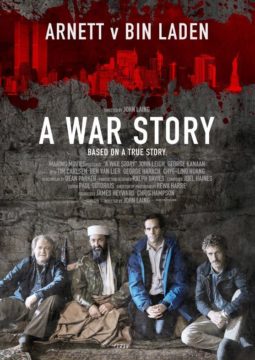 A War Story is based on the interview conducted in 1997 by Pulitzer Prize-winning journalist Peter Arnett with Osama bin Laden. To arrange the interview, Arnett and his producer Peter Bergen met with bin Laden’s Lieutenants in London and persuaded them to allow him to meet bin Laden. Arnett then flew to Pakistan and on to Afghanistan where he and his crew were blindfolded and driven to a secret location in the mountains.

Bin Laden’s responses were a window into the future as he outlined his vision, explaining his determination to expel American troops and rid Muslim lands of American influence. Arnett probed bin Laden; on his position to Saudi Arabia, the holy war, fighting the Soviets in Afghanistan. Was he a sponsor of international terrorism and responsible for attacks against US and Saudi figures? Bin Laden articulates his faith, referencing historical wrongs, defending the actions of himself and Muslims throughout the world.

Finally, Arnett asked “Mr. bin Laden, what are your future plans”? Bin Laden replied, “You’ll see and hear about them in the media, Mr. Arnett”. On the eve of 9/11, Arnett flew into New York City to stay with his daughter. The next day he watched horrified as the towers collapsed; his mind recalling the interview and bin Laden’s veiled threat.