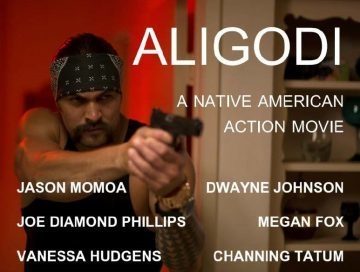 AHOTE is on leave from his FBI job for being too quick to pull the trigger. The rioting in Portland had worn

on his nerves, and when a masked rioter raised a brick to strike a fellow agent, Ahote was quick and accurate.

To avoid the negative publicity affecting her burgeoning newscasting career, his lovely wife left him with a

mountain load of debt and a mortgage he could no longer afford, poisoning his son against him on her way out.

A demotion to a desk job salvages him a paycheck and spares him prosecution, but he is restless behind a

computer ten hours a day. Growing increasingly disenfranchised with the government scrutinizing every move of

local to his Cherokee tribe, desiring to keep all his options open if he loses his job. As he tells his friend in the

Bureau, “When the lawmakers are as lawless as those they are prosecuting, where do your loyalties lie if not

with faith and family?”

Devastating news rocks his world and turns his heart to home. Odalve, who was the heir to their vast family

casino fortune and next-in-line to be Chief of the Cherokee, is found dead with a noose around his neck. The

funding and counseling for the troubled and grieving.

Ahote comforts his grieving family, but is immediately suspicious of the cause of his brother’s death. Odalve had

been Ahote’s informant against rival drug lords who peddled in people, a practice both Ahote and Odalve

detested and confronted. They were closer friends than their grieving relatives realized.

Ahote confronts the coroner, the witnesses who found his brother’s body in a penthouse suite, and even his

brother’s wife, finding them all strangely elusive. He convinces the coroner to let him see the body, and collects

a salive sample. Ahote confronts several suspiciously following him on the road, which leads to a gunfight in and

around the car, and ultimately, hand-to-hand combat in his father’s casino. A young female agent, Adora, is

involved in the fight, but Ahote takes it easy on her, and gradually she shows sympathy for Ahote and becomes a

love interest. One of the villains shows familiarity with the Falammichi Native American martial arts style, and

leaps from the sixth floor of the casino to avoid answering Ahote’s questions.

In the course of their fight, security guards arrive and pull their weapons on Ahote, but strangely they are

attacked by another band of criminals attempting to rob the casino. The robbery is foiled with Ahote’s aid, but

within minutes federal agents arrive to undertake an investigation into the attempted casino robbery. The

casino manager attempts to repel the federal investigators because the robbery was foiled, but with the death

of a security guard during the attempted robbery, the feds claim jurisdiction. Ahote is mistaken for one of the