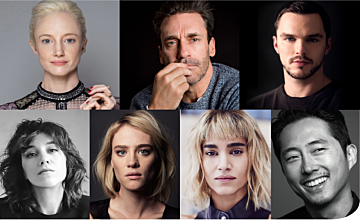 Aliens have arrived on earth, only this time we experience the invasion from their point of view... The Zellner brothers recruit a star studded cast in this original and stylish action-comedy. Jon Hamm, Andrea Riseborough, Nicholas Hoult, Charlotte Gainsbourg, Mackenzie Davis, Sofia Boutella and Steven Yeun are a gang of aliens here to take over the world!

They look and sound human, but “Alpha Gang” are aliens, sent on a mission to conquer Earth. Immaculate leather jackets, hair sculpted to perfection, and shining chrome motorcycles. Armed and dangerous, they show no mercy, until they catch the most toxic, contagious human disease of all: EMOTION. World domination’s in danger of derailing once they start to feel joy, fear, empathy, and — worst of all — love... but hopefully they can still annihilate mankind before it’s too late.