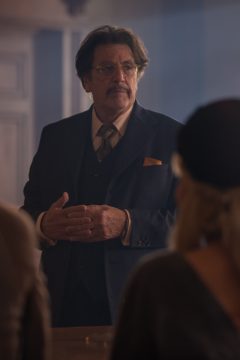 Based on a true story. Eccentric, brilliant lawyer James Laughlin (Al Pacino) boldly accepts the case of American entertainer Mildred Gillars (Meadow Williams) from ten counts of treason charged by the US government shameless of the inevitable backlash from his country. During WWII, Mildred became a powerful weapon in the hands of the Nazis and was forced to sing defeatist war propaganda to US soldiers based in Europe. Terrorized and raped by Joseph Goebbels, Hitler's right-hand man, Mildred broadcasts hate-filled messages in order to survive the dark and dangerous world of the Third Reich. Despite attempting to murder Goebbels during a forced sexual encounter, Mildred is eventually captured by American authorities and sent to trial where, against all odds, Laughlin struggles to redeem her reputation and maintain his own.