Home / Films / BABY ON BOARD 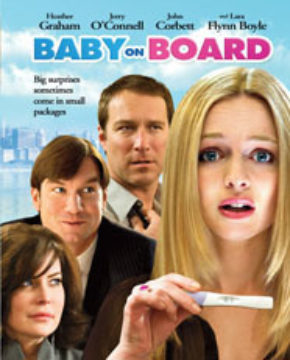 In the tradition of Knocked Up and The 40 Year Old Virgin arrives hilarious comedy BABY ON BOARD; the story of Angela (Heather Graham)an ambitious, image-conscious businesswoman working for over-demanding boss Mary (Lara Flynn Boyle). When Angela becomes unexpectedly pregnant at the peak of her career, her life with her divorce attorney husband, Curtis (Jerry OConnell), is turned upside-down. BABY ON BOARD begins with an inconvenient pregnancy that leads to a nine-month rollercoaster ride as Angela and Curtis try to copeeven as the interference of best friends Danny (John Corbett) and Dannys wife Sylvia (Katie Finneran) escalate the situation into a battle of the sexes.