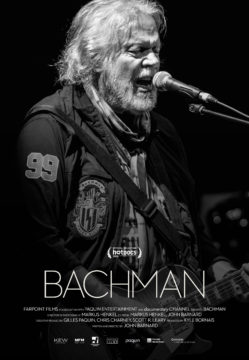 In 1974, Bachman Turner Overdrive was one of the biggest bands in the world with classics like Takin’ Care of Business and You Ain’t Seen Nothing Yet. This is the story of its founder, rock icon Randy Bachman, whose career has spanned more than five decades earning him over 120 platinum, gold and silver records – from his early days with The Guess Who with hits like American Woman, to today.

As one of the few legendary artists to reach #1 in two separate bands, Bachman’s singularly focused goal of creating music has taken him from spectacular highs to crushing lows and back again, where today he reigns as one of the most prolific and iconic artists in the history of Canadian music. Featuring interviews with Bachman’s friends, family and fans including Neil Young, Alex Lifeson (Rush), Peter Frampton, Buffy Sainte-Marie, Paul Shaffer and Chris Jericho.