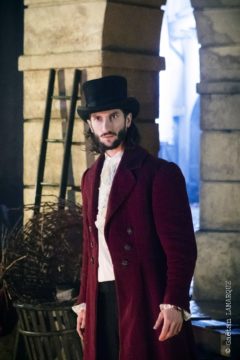 Synopsis
From his vision of a woman, shot down in a street riot during the Second Empire in 1852 Paris, the story begins with a student artist. Frederic traveled to Egypt to experience the colossi Pyramid and Sphinx. Sailing along the soon to be completed French engineering Suez Canal, he saw a peasant Egyptian woman carrying a water vase on her head. Frederic then drew the same woman but holding a lantern up with her left arm and hand. He titled the drawing 'Progress Bringing Light To Asia.' After returning to France the proposal to construct a lighthouse, at the entrance to the Suez Canal, was submitted to the Egyptian Ambassador during a celebration hosted at Versailles. Frederic's vision of a colossus woman statue was accepted. Upon returning to Egypt, with a statuette model, the project was aborted do to finance. In desire he returned to France. The government of France in the meantime protesting against a Prussian/Spanish arranged marriage, that would create border tension politically for France, declared war against the Prussian government. Frederic was soon recruited to lead the Colmar Militia for the fortification in Alsace. Lorraine and Alsace was soon over thrown and Napoleons soldiers captured. After paying five billion Francs for retribution, agreed to by the Prussian government, Frederic was free to continue his life as an artist. With republic sentiment he sculpted on a rocky mountain side what is known as The Lion Of Belfort. This creation was to show that the Prussians and Spanish did not destroy France and her true spirit. Returning to Paris he resumed work at the Le Grand School Of Art. His associates convinced him a work was needed to honor American/Franco relations. Edouard Laybolye, a law professor at the University of Paris, arranged Frederic to travel and see for himself America. With colleagues support from the Harmony Society, a Franco/American fraternity, he sailed on the PIERRE from Le Harve. On the voyage, after many drawings of a woman colossus lighthouse, 'Liberty Enlightening The World' was born. Frederic met Jeanne Bauex, a French women refugee associated with the Unitarian church in Toronto, through a Harmony Society colleague while visiting New York. Jeanne became inspiration for him to return to France, after his continental tour, and follow through with the project. Working with government officials the plan on having a General Lafayette Statue was completed as well as apart of the Statue Of Liberty. Frederic and Jeanne were married after the 1886 Philadelphia Exposition presentation of the arm carrying a torch. She is to have been his model, inspiration and liberty to follow through with the completed masterpiece.