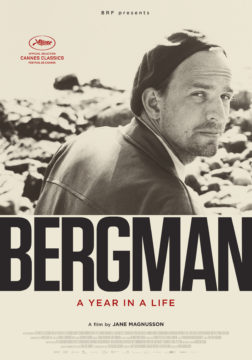 Bergman - A Year in a Life

During a six-year period in the mid-twentieth century something unsurpassed happens. A lanky and not very well known Swede, about to turn forty years old, enters a period of film production without precedent. Between 1957 and 1963 he directs some of the greatest classics in the history of cinema: THE SEVENTH SEAL WILD STRAWBERRIES, THE DEVIL‘S EYE, THE VIRGIN SPRING, THROUGH A GLASS DARKLY, WINTER LIGHT and THE SILENCE, among others. In addition, he directs twelve stage plays, six films made for television and writes several scripts.

BERGMAN reveals previously untold stories and information about Ingmar Bergman's life and character, but also discloses his inner life through his own words. Few artists have explained themselves as extensively and intimately as Ingmar Bergman. From archive interviews, his memoirs and his working journals, we get a unique insight in his working and creative methods, his violent temper, his fears and anxieties, his passions and his doubts.

BERGMAN also explores the existential themes of his films that form the core of Bergman's influential artistic legacy and relate these to his private life. We illuminate Bergman's unique ability to frame his existential dilemmas in such an entertaining manner, and portrays his many fruitful relationships with colleagues including Max von Sydow, Harriet Andersson, Bibi Andersson, Gunnar Björnstrand, Gunnel Lindblom, Erland Josephson, Sven Nykvist, Anna Asp, Lena Olin, Peter Stormare, Pernilla August and others. Through interviews with the people who were closest to him; co-workers, friends and lovers, as well as through a never before published interview with his older brother, we are brought into the life of Ingmar Bergman in search for who this artistic icon really was.