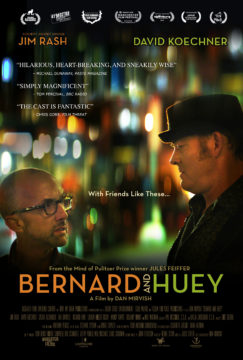 From a script by Academy Award® and Pulitzer Prize-winner Jules Feiffer, Bernard And Huey is a particularly timely story of two men behaving badly, and the smart women who rein them in.

Roguish Huey and nebbishy Bernard are unlikely college friends in late 1980s New York. Decades later, a bedraggled Huey crashes at reluctant Bernard’s upscale bachelor pad. As Huey gets his mojo back with the women in Bernard’s life, Bernard awkwardly falls in love with Huey’s 25-year-old cartoonist daughter, Zelda, and it becomes clear how much growing up the two men still need to do.