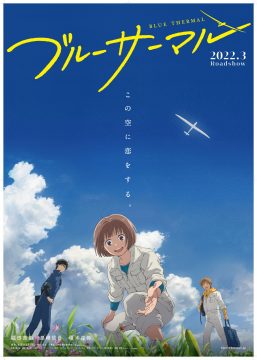 Amid the fresh verdure and radiance of spring, Tamaki Tsuru arrives in Tokyo from Nagasaki to attend Aonagi University in Tokyo with faint hopes of returning a much-changed person. But her intentions are quickly betrayed when certain circumstances force her into joining the school’s athletically-minded aviation club. Its members take part each year in a national glider in which contestants pilot engine-less aircraft (gliders) and compete for speed. A physically demanding club is definitely not the campus life Tamaki envisioned for herself, and she is initially reluctant to join. But when she takes a ride with the club’s captain, a gifted glider pilot named Jun Kuramochi, she finds herself completely enthralled by flight. Under his guidance and that of another upperclassman, Daisuke Sorachi, Tamaki realizes she has potential as a glider pilot and her talent begins to blossom. While outwardly an individual sport, glider pilots must rely heavily on ground support. So when Tamaki takes part in a training camp, she forges deep bonds with her team-mates, beginning with Kuramochi and Sorachi.
At a practice match scheduled against the Kansai region’s toughest rival, Hannankan University, Tamaki is reunited with Chizuru Yano, her half-sister (of a different mother) with whom she has not spoken since the divorce of their parents. With family issues creating a deep rift between the half-sisters, the traumatic reunion is too much for Tamaki to contend with since Chizuru also happens to be the rival school’s glider captain. Coming to Tamaki’s emotional rescue are her team-mates who build up her self-confidence and make her feel at home in the club.

With the arrival of autumn and Tamaki preparing to take center stage in her big debut match, Chizuru reappears as a student instructor to compound the pressure. While their relationship is rife with penned up emotions and missed opportunities, their conversation high in the sky seems to unite them and force the rapprochement they’ve long needed. Having overcome her conflict with her half-sister, Tamaki finishes a remarkable second in the race.
Winter brings a new crisis. Kuramochi has suddenly vanished from school and is rumored to be in Germany, the capital of sport gliding. Dumbfounded by the sudden disappearance of their captain, the team members soon learn of the constraints he had been under. Kuramochi had been receiving financial assistance from a former aviation club alumnus, Yo Asahina, to pay for his bedridden mother’s medical care and for the aviation club. In exchange, Kuramochi had been tasked with Asahina’s unfulfilled dream of winning a world glider championship. Unable to stifle Tamaki’s agitation at Asahina, she asks “to free Kuramochi from this burden and take his place. Asahina agrees but only under the condition that she leads Aonagi to a national championship.
The competition arrives and spirits are running high among the club members and its central figure, Tamaki. Meanwhile, far off in Germany, Kuramochi is taking flight when he gets news of his mother’s sudden passing. Devastated, Kuramochi flies his glider high up into the sky and disappears as if swallowed up by the heavens.
When news comes of Kuramochi’s fate, Tamaki is too upset to focus on the tournament. But at the last moment, she and her teammates take inspiration from the lessons Kuramochi taught them, his words of encouragement, and the spectacular scenery he showed them all. Tamaki soars like a bird in a near perfect flight, overtaking the strong field for a spectacular come-from-behind win. But Tamaki isn’t celebrating for long. “Take me to Kuramochi,” she demands of Asahina.
Tamaki and Asahina prepare for flight at a glider port in Germany. Believing she will somehow find Kuramochi, Tamaki takes her glider high up into the blue canopy of the sky. Flying mostly on strong feelings, the long-anticipated reunion with Kuramochi awaits.