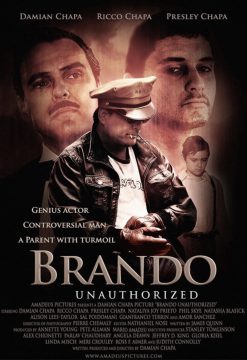 Brando Unauthorized delves into the career of Marlon Brando. It digs deeply into his childhood and his relationship with his son, Christian Brando. Damian Chapa plays the lead as Marlon Brando. The movie takes us on a journey through Christian Brando's drug addicted past and gives us insight into what it was like living in the shadows of the world's greatest actor. Brando's mother was an abusive alcoholic and his father was a promiscuous and disturbed man, who sometimes abused Brando, leaving him emotionally distraught. Brando's own life reflected a great deal of pain, leaving many women behind with anger and hatred towards the iconic movie star. Brando is sometimes thought of as the best actor who ever lived.