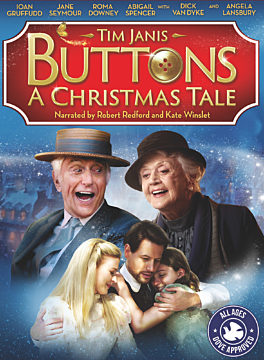 Just in time for Christmas this new heartwarming tale begins with two Guardian Angels Dick Van Dyke & Angela Lansbury who are sent to help two orphan children Annabelle & Emily. During the early 1900s tragedy strikes Annabelle’s happy life when she is left to the care of her Mother’s cruel step-sister Mrs. Wentworth (Katie McGrath) who sends her to work at the mill, where she is destined to become a “mill girl”. Annabelle escapes and lives on the streets alone and broken hearted, but with a little help from her Guardian Angel (Dick Van Dyke) Annabelle finds a new home and discovers happiness once again. Now years later during the Great Depression a young orphan Emily is rescued from the streets and given temporary shelter at Belford Hills Hospital. Just when Emily’s future seems dim she is visited by an Angel named Rose (Angela Lansbury), who has come to help Emily fulfill her to wish to find a family. On Christmas Eve, through the workings of these two Angels Annabelle and Emily’s stories are woven together into a triumphant & inspiring ending, and each one rediscovers that even in times of darkness, magic and miracles do exist, if you simply remember to believe.