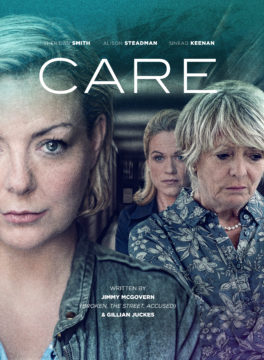 After her husband’s departure, Jenny (Smith, Cilla, Mrs Biggs) is fully reliant on the childcare her mother Mary (Steadman, Hold the Sunset, Gavin & Stacey) provides. But when Mary suffers a devastating stroke and develops dementia, Jenny’s world comes crashing down, as everything changes for her and her sister Claire (Keenan, Little Boy Blue, Being Human). Finding herself torn between her own life and the wellbeing of her mother, Jenny soon discovers that another way could be possible – but she’ll have to fight for it.

Care is also written by Gillian Juckes, whose real-life experiences formed the inspiration for the story.