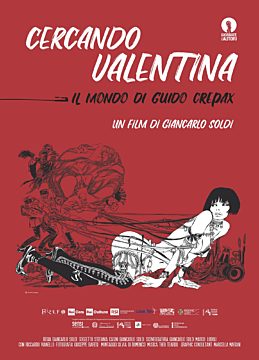 Late Sixties: Paris, London and Milan experience creative unrest, pulse to the same rhythm, stars in the same cultural constellation, which rebels and renews itself. Guido Crepax intercepts all that is new in a Milan in turmoil and captures its revolution, also aesthetic, transposing everything into his drawings and stories, breaking and innovating the structures of storytelling. Valentina became an icon for many generations.

It’s a love story between the two protagonists of the comic, between Crepax and his creature Valentina, between the film director and Valentina with everything she represents.

New York. The story starts with an animation scene where Rembrandt, Valentina’s long-time boyfriend in the comics, receives a message from her, she’s lost she’s asking for help. He comes to life emerging from the cartoon to look for her. Through the narrative device of this search, the documentary shows Guido Crepax’s world of those years, coming in and out of the past, with a rhythm and visionary ability typical of the artist’s style.Valentina is Crepax alter ego, the dreamer photographer is a free liberated woman who breaks a taboo and clears the right of the woman to have an erotic feminine imagery.

Valentina is beautiful as Louise Brooks, disturbing as a Fontana cut, as conscious as Bob Dylan's lyrics and as free as Charlie Parker's music.