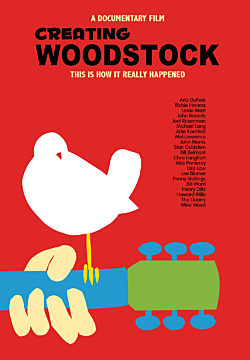 For three days in August 1969, nearly a half-million young people descended upon Max Yasgur's farm in upstate New York for the rock ‘n’ roll event that defined a generation. Mythologized for 50 years, the filmmakers set the record straight with "Creating Woodstock,” the most comprehensive examination of how the festival came to be using original interviews with key figures, rare archival footage and unearthed photographs.

The founders of Woodstock Ventures - John Roberts, Michael Lang, Joel Rosenman, and Artie Kornfeld—along with the best production talent on either coast, including John Morris, Bill Belmont, Mel Lawrence, and Chip Monck recall moments from the initial idea for the festival, to the search for a suitable site and then the race to build a venue, promote the event and, most importantly, book the bands.

Find out why the Grateful Dead wanted a “do over" and Crosby, Stills & Nash weren’t going to show up, why The Who refused to play and Jimi Hendrix almost didn’t make it, and how it turned into a free concert. Richie Havens, Arlo Guthrie, and Leslie West recount their experiences, including performing on a stage that nearly collapsed, and learn how a 15-year-old girl may have saved the festival from being shut down entirely!