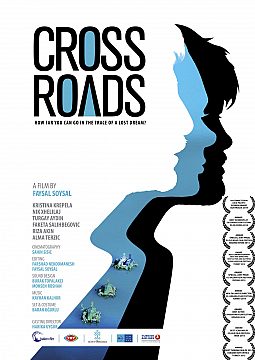 When they were kids, Bunyamin (Benjamin) and his brother Yusuf (Joseph) fall in love with the same girl-
Zeliha and a childish game leads to Zeliha’s death. Bunyamin can never forgive himself and face up to his
brother, instead; he keeps running away from home with excuses. After his graduation, he drifts to Bosnia to help with the discovery of victims bodies from the mass graves. The emotional pressure of his job brings his past back to him in his dreams, instead of being himself in his dreams; he turns into his brother Yusuf who struggles to find his well in the trace of a woman with Blue dressed and veiled. Zrinka is a Serbian-Bosnian psychologist helps people with post-war suicide syndrome. While She considers committing suicide on Mostar Bridge Bunyamin helped her to avert her from her intent. Mysterious nature of Bunyamin attracts her. Zrinka tries to help him to be released from his qualms of conscience during his illness into the amnesia. Zrinka fells in love with him. After completing his job in the ICMP, (International Commission on Missing Persons), Bunyamin returns to Turkey to face his brother and of course to deserve Zrinka’s love. While waiting for his return patiently, one day, Zrinka sees that something bad happens to him in her dream. She follows her instincts and begins a journey through Turkey to help him and find an answer to her love. In Hasankeyf, instead of what she expects, she finds another truth and the true love which we have
been seen like in Bunyamin’s dream. A new reality drenched in dreams by a new love definition.