Home / Films / Curse of The Jerunei 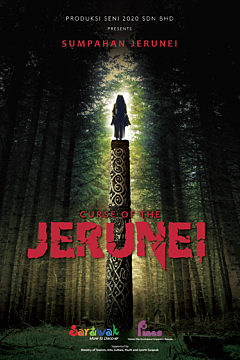 In acient Melanau, the deaths of aristocrats or head-of-village were honoured by burials poles called “Jerunei” that required the sacrifice of two innocent lives - a slave boy and a virgin girl. A long time ago, a young girl was sacrificed on one such Jerunei.

​The story revolves on a group of researchers headed by Professor Sani who has written many books on the Tiang Jerunei or Totem Pole and eventually endorse it as a heritage site. During the research mission in the rainforest they discovered the true story that took place in the 16th century. The group of researchers team go through the mysterious mystic and encounter nightmares journey and came to know the real intentions of the land owner who has used them to achieve his personal greed and gains. After many encounters and challenges the group eventually manage to endorse the JERUNEI TOTEM POLE as a heritage site and becomes an iconic landmark.