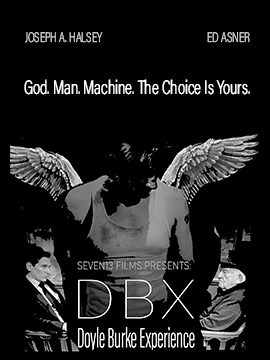 DBX: The Doyle Burke Experience is a sci-fi series exploring how God, man and machine intertwine to cause the potential collapse of society and the breakdown of the world as we know it. Doyle Burke is an Afghanistan war veteran, who is suffering from a heroin addiction and PTSD. Mac 5 is a genetically engineered artificially intelligent symbiotic machine who was created from the DNA of Doyle Burke. As Doyle resolves to terminate his connection with his symbiotic AI counterpart; Mac 5 continues his relentless pursuit. The story unfolds as Doyle confronts his inner demons and puts faith in the Angel, Alexander, who selfishly seeks to gain the favor of God and destroy the artificial bonds between man and machine.

Doyle Burke is an Afghanistan war veteran suffering from heroin addiction and PTSD. After waking from a hard night of using, Doyle is greeted by Alexander, a spiritual being who gives Doyle the choice to turn the tide of a mystical war and gain spiritual redemption. He tasks Doyle to steal an ancient artifact that will tip the scales of good versus evil. In the meantime, MAC 5, Doyle’s artificial intelligence (AI) counterpart is on a mission to find Doyle and sever a symbiotic connection that is destroying his operating system. MAC 5’s first step is locating and recruiting Doyle’s father George to aid him in his search.