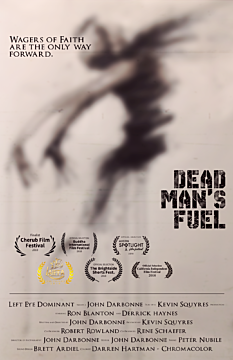 A desperate man wakes up, lost, in a riverbed where he meets a vicious gunslinger who says he is there to give him instructions and equipment for a journey, one he will take alone.

Set in the English colonies during 1600's in the America's, Crispus Dabney is a man the run for murdering his father. The last thing he remembers is being captured, approaching the gallows, then waking up in a deserted riverbed. Soon, he encounters Mik, an Irish gunslinger from the 1800's. Mik tells him he is there to give him instruction and equipment for a journey.

A battle of wills ensues where the two men try to wrestle control from one another. Mik, seems to know a secret, Cripsus is desperate to escape. After gathering his equipment in a deserted barn, Crispus begins to questions the man's intent. The gear is too specific, and violent, maps, knives, intstructions on how to saw off you own limbs. In this tense back and forth, Mik sends Crispus out into Purgator to pay for his sins.

Crispus finds a bizare town inhabitied by demons and people alike. He learn he has a remarkable strenghth and is made an offer for redemption. There is a lost angel that has been found, and someone must help her escape this place that seems to go on forever.