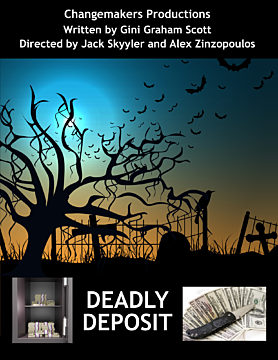 Deadly Deposit is a suspense/thriller about a real estate agent closing a big deal who puts a two million dollar payment in the wrong bank account of a struggling entrepreneur who spends the money. He desperately seeks to get back the money before the deal collapses and the mob finds him.

The film tells the story of Jake, a real estate agent, and Lester, a struggling small business owner, who connect with each other when Jake mistakenly puts $1 million in Lester’s bank account and Lester spends it, thinking he has been blessed by some mysterious benefactor. Unfortunately, the $1 million is Jake’s investment in a major real estate deal that will save him from bankruptcy and worse at the hands of an angry mob. So Jake has to get the money back or else -- and through devious means he discovers Lester’s address, setting in motion a scary cat and mouse game, as Jake seeks to get his money back.