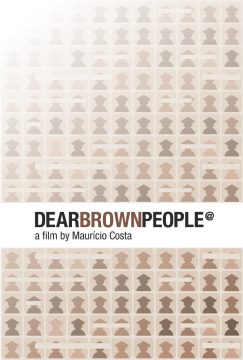 Based on the journey of six brown and mixed-race Brazilians, "Dear Brown People" debates the verification boards of race and ethnicity of candidates for affirmative action in Brazil and the systematic discrimination against brown people in this process.

The six character's journeys guide the debate between twenty interviewees, including historical and young leaderships of the Brazilian Black Movement, members of verification boards, lawmakers, Justices of the Superior Court of Justice, and some of the most relevant black influencers in Brazil. Furthermore, the reenactment of an actual verification board punctuates the main topics throughout Dear Brown People's narrative.

The film opens with a verification board in action.

After a brief introduction to the timeline and the legal structure of affirmative action in Brazil, the interviewees debate the difference between identity, which is subjective, and identification, which is how other people and, in this case, the government, identifies an individual. In this segment, Luan and Luciene tell their experiences in verification boards and how the procedures and results affected their self-perception. Finally, the characters tell how, why, and when they recognized themselves as blacks. Friar David, Roseli Faria, Natalino Salgado and Gleidison Dias are the most important specialists in this debate.

The President of the verification board calls the vote on the features of the candidate. There's a tie: 3 x 3. He calls the debate between the members.

The narrative moves to the subjectivity of the verification process and how the attempts to become more objective result in pseudo-scientific practices of measuring noses, lips, and skin tones. Finally, there's a comparison between racism in Brazil and the United States to show how the different regional perceptions, even in the same town, affect the process of deciding who is black or brown and who is not. Luan, Luciene, and Cristina are the main characters in this segment. Gleidison Dias, Marcilene Garcia, Friar David, and Sidney Sousa Costa are the main interviewees.

The board debates the candidate's features: hair, nose, lips, and skin color.

Hence, the film moves to the debate on hundreds of fraud cases on racial quotas both at the Universities and public selections to the civil service. On the one hand, the interviewees discuss how white Brazilians take advantage of the self-identification system to take the spot of black and brown people, present a famous blackface case and several cases of fraud. But, on the other hand, the interviewees also debate how brown and mixed-race people have been falsely accused of being fraudsters, persecuted, and threatened on social media. Janedson, Luan, Glaucielle and Luciene are the main characters in this segment. Cilas Machado, Herbert Santos, Sidinei Sousa Costa, Friar David and, most importantly, Justice Benedito Gonçalves are the main specialists.

The board debates the candidate's skin color.

The next segment, "Dear Brown People" raises the main question: what mean to be brown in Brazil? The interviewees discuss the real subject of affirmative action, how some brown people are white, and how the features are the legal and most important criteria to decide who's black or brown and who's not. Luan and Cristina are the main characters in this segment. The critical interviewees in this topic are Winnie Bueno, Friar David, Herbert Santos, Gleidsion Dias, and Marcilene Garcia. Friar David introduces the division between dark browns, brown browns, and light browns, leading the movie to debate racial colorism.

The board discusses the candidate's hair.

In this debate, Winnie Bueno and Luiz Augusto Campos take the lead to discuss how racial colorism operates in Brazil, the differences with the United States, and the consequences of the verification process. Friar David opposes their opinions. Next, Luan, Luciene, Bárbara, and Cristina talk about the racial non-place they live in, experiencing racism from white people and being accused as fraudsters by black people, which leads to the following topics: gender, sexism, and self-esteem.

Finally, Dear Brown People discusses if the verification boards are racial courts and if affirmative action is positive in Brazil. Luan gives the last word about the brown identity in a country that alleges to be the blackest country outside Africa.

In the final image, the President of the verification board calls the vote, there's a fade-out, and Dear Brown People cuts to the lettering "what's your sentence?", giving the audience the power to answer the main questions raised by the film.