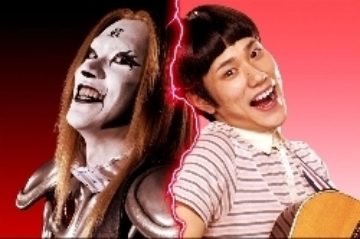 The story is about a pure-hearted 23-year-old boy (Kenichi Matsuyama “Death Note” “L ”), who cherishes French pop / bossa nova music, happens to be a member of a Death Metal band "Detroit Metal City" (DMC) and turns out to be its charismatic vocalist under the fictitious name of "Johannes Klauser II". Despite the intention of becoming a pop celebrity, he makes a triumphant debut as the Death Metal vocalist, and the story hilariously describes the array of his woes until he finally faces off against the legendary and world-renowned Death Metal vocalist "Jack IL Dark" (played by Gene Simmons of KISS) on the stage.