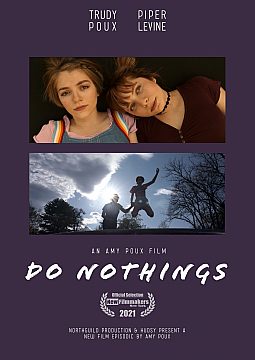 DO NOTHINGS is a 10-minute short film that introduces us to fourteen-year-old "Tamarin" (they/them) and their outsider best friend, "Alex" (she/her). The film takes place over one day and brings us into their bubble, an irrepressible escapade of dancing, vamping, gorging, and confessions. Torn between fitting in and forging their own paths, when Alex admits to vaping, it tests the strength of their friendship and the safe space the two of them have always known.

Produced in 2019, DO NOTHINGS was Written/Directed by Amy Poux, Produced by Northguild Production and HUDSY, and starred Trudy Poux and Piper Levine. DO NOTHINGS has not yet been released.