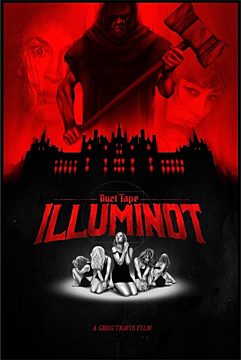 Samantha is an attractive 18 years old who is also intelligent

with depth of character. Her best friend, Daniela, is also smart

but has a wild side. The two are getting ready for a big party in

grandparents, Marvin and Ruby, who raised her since infancy.

The girls take an Uber to the Hollywood Hills. Once at the

party, they have a great time meeting a variety of characters of

Afterwards, they go out to the spot nearby where they’d

requested an Uber to pick them up. Looking around, they

notice that no one else is there on the dimly lit street corner.

Suddenly, a beat-up van with no windows screeches to a stop

next to them. Two filthy speed freaks jump out, grab the girls,

and throw them in the back of the van. There are five other

young women tied up in the van. The speed freaks violently

restrain Samantha and Daniela with DUCT TAPE and shove

them with the other girls.

The van squeals off into the night. The speed freaks are

screaming and acting crazy. The van is pulled over by two

policemen for speeding. A shootout entails, leaving both cops

dead and one of their accomplices mortally wounded. The

speed freaks drive on. Hours later, they arrive in the foothills

The van drives through the gate onto an isolated estate and

around to the back of the beautiful 18 th century castle. The

as The Administrator and exchange the seven kidnapped girls

for a large package of Methamphetamine speed. An assistant

leads the girls inside.

As the speed freaks drive away, a dark figure, The Grim

Reaper, ambushes them and kills one of them with a

sledgehammer. The other Speed Freak escapes.

The whimpering girls are brought into a large dark room

with seven jail cells in it. An older Cuban woman, Zamira, with

a prominent facial scar screams orders at the girls. She makes

them strip and sends them off to a communal shower. Each girl

is isolated in her own jail cell. Assisting the Zamira is a Chinese

woman, Ma Li; she is dressed in a military uniform and shouts

Back in Samantha’s home, her grandparents are worried

about her not coming home. They try her phone but get no

Samantha is taken into a special room to be interviewed by

the Administrator. She is hooked up to electrodes. He asks her

a series of invasive personal questions. He zaps Samantha

every time she fails to cooperate. At first, Samantha remains

defiant, but after a few shocks, she starts to cooperate.

As the days pass, the deprivations and all the screaming by

Zamira and Ma Li are taking their toll on the girls; they have all

stopped resisting and become in full cooperation of any and

every instruction. They are told of an upcoming event in which

The Triad will inspect them. All the girls will need to be

Late one night, a tall, elegant woman, Mary, is led into the

jail area. She uses her small flashlight to observe each of the

seven sleeping girls in their cells.

When the light shines on Samantha, and her eyes flutter

open. She sits up and stares back. Mary asks for her name.

Samantha answers. Mary smiles at her then simply turns and

On the day of the big event, all the girls are put into

exquisite new designer dresses; a lot of time is put into

perfecting their hair and makeup.

The girls are brought to a large assembly room where forty

or so formally dressed men and women are milling about. The

everything. To one side is an ornate stage with three large

The three elderly men of the Triad appear, taking their

places. On the left is Shamus, wearing menacing thick glasses;

in the middle is Otto, the most imposing of these three; on the

right is the only one who might be called handsome, Egon.

Suddenly, strange music fills the ballroom. The girls are

paraded around for the cult members to preview. An auction

shortly ensues where two of the girls are auctioned off for

with a hangman’s noose around her neck. The Triad judges her

for having tattoos, and she is hung from an overhead beam for

all to see. The convulsions of the hanging body gradually stop.

The cult members heartily clap with approval of the show!

Marvin is standing outside the Hollywood Hills party house.

flashlight to observe her. She remains deep asleep. He stands

there for a while in silence and then leaves.

Marvin and Ruby wake up in bed. They argue about what

they should do about Samantha.

throws the plate of food across the room, screaming

hysterically. In the process, Daniela manages to escape from

the cell and makes her way to the roof. The Grim Reaper

eventually catches her. As Grim Reaper is putting Daniela back

into her cell, Samantha kicks him with both feet in the head.

This leads to a major escape with all the girls involved.

The girls are dressed in costumes. They’re brought into the

ballroom and paraded around as a preview for the auction.

Daniela is brought to stand in the center of the assembly

The Triad listens to the Administrator and Zamira present

speaking with a heavy German accent, he delivers a long and

At the end, he adjudicates that Daniela must perform an

the cult. Daniela pretends to agree to the exchange the attacks

The group begins to disperse. Several of the men grab the

leashes of the other girls and take them away, presumably to

be sex slaves. Mary takes Samantha away with her.

Mary, David, and Samantha are in Mary’s room. Samantha is

sobbing because her best friend, Daniela, has just been

bludgeoned to death. Mary and David ask her in detail about

her childhood. She tells them as much as she can recall, but

that isn’t much. Mary and David are understanding and

compassionate. After a while, she falls asleep on their sofa.

Marvin and Ruby are driving in their car, peering out at the

night, exchanging strange looks. They turn off the freeway

onto an isolated and primitive road.

Samantha wakes up from a dream and sees that David and

Mary are still asleep in their bed. She grabs their keys and

unlocks the door to escape. In making her way downstairs, she

runs into two other girls who are also trying to escape. The

three of them eventually make their way downstairs and out of

Several people from the castle are rushing out, trying to

catch up with the girls. Samantha suddenly she sees her

runs to the car; Marvin and Ruby jump out and hug Samantha.

In her euphoria, she failed to notice that the group from the

castle has caught up with them.

The first to reach Samantha are Mary and David. Samantha

grabs Marvin and begs him to take her home.

Marvin looks deep into her eyes and tells her, “You are

home. This is your home. Mary and David are your parents.”

She is horrified; she is confused, but eventually she realizes it

must be true. She makes one last attempt to escape the

These are not the details of the exact ending, which is much more

complicated and will be revealed in the screenplay.