Home / Films / Eye Of The Needle 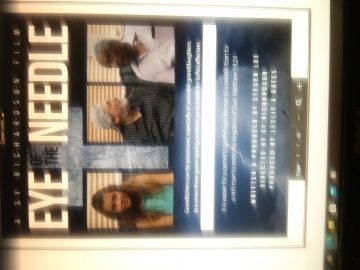 Eye Of The Needle

EXECUTIVE SUMMARY
Most of us have fond memories of our grandparents. We may have listened to their stories of
their own youth. We may have learned how to fish or draw or bake cookies from them. Our
memories of them are many times of perfect love. Of life lessons. Of never-ending patience and
attention.
But contrary to our memories of them, grandparents are human, with flaws, problems, and
faults. And sometimes they need a little motivation to find the path to actually being the
grandparent they want to be remembered as.
What better motivation and encouragement than the needs of their own grandchild – in this
case, an adorable 11 year-old girl with a winning smile and a deep understanding of the Lord
and His ways.
Eye of the Needle is about that struggle.
The following pages contain an overview of the motion picture project, Eye of the Needle.
This includes the synopsis, the screenplay, and the offering to investors.
Investment in the film industry is highly speculative and inherently risky. There can be no
assurance of the economic performance of any motion picture since the revenues derived from
its production and distribution depend primarily on its acceptance by the viewing public.
However, Eye of the Needle is designed to minimize that risk, if not render it non-existent.
Eye of the Needle is written as a family/faith-centered film, which is growing as a commercial
genre in the motion-picture and television world-market today. The length and production
aspects of the script virtually guarantee that the picture will be completed on-time, within budget,
and be the basis for a film that will appeal universally to cultures around the world.
Casting considerations that include recognizable talent and a veteran director – Sy Richardon’s
fan base is literally international -- are designed to cross racial, cultural, and religious
boundaries.
The budget has been designed to attain high-quality production values while being low enough
to greatly increase the chances of being profitable. As an ultra-low budget film of under
$150,000, we will be able to take advantage of many discounts in cast and crew, especially with
the union, Screen Actors Guild.

4
The story of Eye of the Needle itself is one that features real life dilemmas that bring out the
best and worst traits of human nature – love, hate, greed, and violence.
To summarize, Eye of the Needle is highly commercial, easily produced, timely, wisely
budgeted, and potentially very profitable. But even more importantly, Eye of the Needle
drives home the role of grandparents in the spiritual identity of their grandchildren and the family
as a whole.
Without being overly scripture-based, the grandparents’ role in the Christian development of the
family is driven home.
According to the fund research firm, Morningstar, the value of assets held by faith-based funds
has jumped nearly seven-fold since 2000 to $15.9 billion. In general, both religious and secular
films are becoming more acceptable as investors have a greater desire to make investments
that do not conflict with their core values.
At a production budget of $120,000, Eye of the Needle has the potential to be a very
profitable and attractive investment.
THE FILM
Sy and Johnny are two grandfathers who are like the “odd couple.” They pretty much agree only
on one thing -- they both love their granddaughter, Sofia. When Sofia’s parents go to Burma for
a summer church mission, the grandfathers are left in charge of their granddaughter. Sofia’s
mother is distraught with the idea of leaving her daughter, but typhoon-ravaged Burma needs
additional doctors, and Sofia’s parents, Phil and Angela, are the best physicians to help with the
increasingly desperate situation there.
After Phil and Angela leave for Burma, Johnny has to figure a way to win a lawsuit in New York
and Sofia could actually come in handy as a sympathy ploy. At the same time, Sy wants her
here in Palmdale to help him remain positive in light of a very dark future.
The parents agree that Sofia can choose where she lives for the summer, not realizing these
ulterior motives.
And with this, the games begin.
Each grandfather tries to persuade Sofia. Things get more complicated when another typhoon
hits Burma. With communications down in Burma and no one knowing where Sofia’s parents
are located, the grandfathers realize they could be the legal guardians since no one on either
side of the family wants or is capable of taking care of Sofia.
During this waiting period, when they contemplate the very real possibility of being legal
guardians, the two grandfathers -- with the help of Sofia, the church, and a pastor – find their
better sides and get closer to God. They step up to become the grandfathers they need to be.