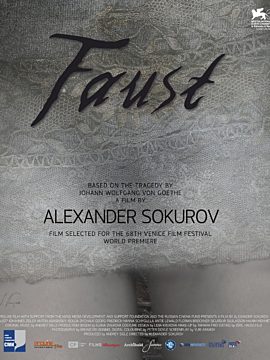 Faust is the final installment of a cinematic tetralogy on the nature of power. The main characters in the first three films are real historical figures: Adolf Hitler (Moloch, 1999), Vladimir Lenin (Taurus, 2000), and Emperor Hirohito (The Sun, 2005). The symbolic image of Faust completes this series of great gamblers who lost the most important wagers of their lives. Faust is seemingly out of place in this portrait gallery, an almost museumesque literary character framed by a simple plot. What does he have in common with these real figures who ascended to the pinnacle of power? A love of words that are easy to believe and pathological unhappiness in everyday life. Evil is reproducible, and Goethe formulated its essence: “Unhappy people are dangerous.”

Sokurov’s Faust is not a film adaptation of Goethe’s tragedy in the usual sense, but a reading of what remains between the lines. What is the color of a world that gives rises to colossal ideas? What does it smell like? It is stuffy in Faust’s world: earthshaking plans are born in the cramped space where he scurries about. He is a thinker, a mouthpiece for ideas, a transmitter of words, a schemer, a daydreamer. An anonymous man driven by simple instincts: hunger, greed, lust. An unhappy, hounded creature who issues a challenge to Goethe’s Faust. Why stay the moment if one can go farther? Farther and farther, pressing forward - not noticing that time stands still