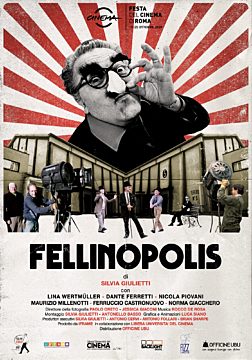 Enter the world of Federico Fellini. The world behind his camera on the sets and backstages of his films captured by another hidden camera and brought to the light after 40 years. Pull back the curtain and watch the Maestro at work realising his dreams and creating his magic. The centenery of Fellini affords an opportunity to see him afresh, to discover new dimensions of the master film director.

The hidden camera belonged to Ferruccio Castronuovo. Between 1976 and 1986, Ferruccio made films known at the time as ‘Specials’ for publicity purposes, showing the backstage activity of the films of Federico Fellini: ‘Casanova’, The City of Women’, ‘And the Ship Sails On’ and ‘Ginger and Fred’.

Fellini trusted Ferruccio and gave him a carte blanche access to his sets and back lots. He afforded him an unusual intimacy unselfconsciously revealling everything to him and to us 40 years later. Ferruccio unveils, a world apart, a city of the imagination, populated by unique characters, which has a life of its own, a ‘Fellinopolis’.

Fellini’s most trusted collaborators, many of them Oscar winners, Lina Wertmuller, Nicola Piovani, Dante Ferretti, Maurizio Millenotti,speak of their relationships with the Maestro, of working and living with him. These exceptional interviews and the backstage footage reveal Fellini’s playfulness, perfectionism, his charm and charisma, his inventions and lies, his candour and his manipulations, a new take on the man and his methods. We learn what is was like to work with Fellini and why he attracted such dedication and devotion from his collaborators. They tell of Fellini’s views on women, on music, on method. Fellini tells of his unique approach to the cinema.

Get lost with Fellini behind the scenes, meet the faces from the films, watch him rehearsing Marcello Mastroianni and Giulietta Masina, orchestrating the extras, gliding across the sets with his Mitchell camera, his voice echoing, creating his special effects in ‘Stage 5’ of Cinecittà. Enter the city of dreams. Enter Fellinopolis.