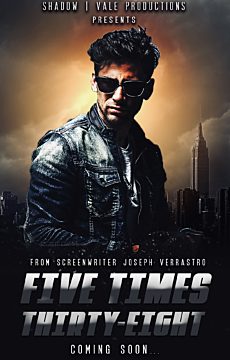 In a small suburban town on the outskirts of a large, crime-ridden city lives ANTHONY (36), son of an ex-hitman and in love with SARYN (28), sister of the leader of a local urban gang, TALIB (32). When Talib’s latest heist is compromised by someone leaking information from the inside, his men are slaughtered by the same South African gang that turned on Anthony’s father years ago. Anthony sees an opportunity to help the woman he loves, and finally get justice for his dead father, and joins forces with Talib and his gang in an attempt to take down the rival gang and free the small town from their decades-long stranglehold.

Talib is skeptical of Anthony’s abilities at first, but on their first heist together Anthony proves himself when he prevents a second massacre at the hands of the South Africans. When discovering the mole inside his operation drives Talib to the brink of insanity, Anthony must operate as the leader of the gang, helping them regain their power and getting closer to finally getting revenge, but pushes Saryn away in the process.

When a corrupt cop with ties to Anthony and his prostitute girlfriend are revealed as the source of the leaked information, everything comes to a boil and no one is sure who to trust. Meanwhile, Anthony is getting closer and closer to the vengeance he seeks on ALCO (62) the man who ordered both the hit on his father, and organized the slaughter of Talib’s men.

Once Alco realizes who Anthony is, he tries to eliminate him by sending Vincenzo, the assassin who murdered and replaced Anthony’s father. Only with the help of Saryn and his Uncle can Anthony survive a final showdown against Vincenzo on the night of the biggest heist, when both the South Africans and Talib’s gang know what’s about to go down...